Check out our blog for the latest Reshape Your Health Podcast episodes & YouTube videos.

How to Reduce Your Hunger Hormone (Ghrelin) & Prevent Weight Regain

Note: Reshape Physical Therapy and Wellness evolved into Weight Loss for Health, and finally Zivli. How to Lose Weight After 50 was our first course that eventually grew into Zivli. Some old blog posts or resources mentioned in this episode may have been removed.

Have you ever lost weight and struggled with your appetite? Like you were constantly hungry, or your hunger increased after losing weight, making you feel like you’re swimming against the current to stick to your plan? Have you ever tried intermittent fasting but felt like you had uncontrollable hunger and weren’t able to fast for as long as you would have liked?

Why is it so hard to keep the weight off? There are several reasons for weight regain, and today I’m focusing on a major player...a little hormone called ghrelin. Also known as your hunger hormone.

In this episode, you’ll learn 3 tips to lose weight in a way that helps reduce ghrelin levels so you’re less hungry, less likely to regain the weight you worked so hard to lose, and can increase your fasting window.

Listen to This Episode

Highlights From This Episode

Ghrelin is a hormone produced in your stomach. Think of ghrelin as your appetite stimulating, weight gaining hormone. Ghrelin’s primary role is to stimulate your appetite, slow your metabolism, and increase your fat storage. Not surprisingly, ghrelin levels will rise after a period of dieting, specifically with chronic calorie restriction. Said differently, your hunger hormone goes up after you lose weight to stimulate your appetite and try to make you regain your weight.

Ghrelin is just one of the many reasons why eat less, exercise more doesn’t work for lasting weight loss. When your ghrelin levels go up, you’ll sense more hunger and want to eat more food. Plus, ghrelin slows your metabolism down and causes more of the food you eat to be stored as fat.

Ghrelin is more than just your “hunger hormone” and has effects on muscle, bone, heart and even cancer. But for the purpose of this episode, I’m just reviewing its role in weight management.

Ghrelin is released in a pulsatile pattern, meaning that it rises and then it falls again. Some literature states that ghrelin rises before a meal and falls after you eat. However, new research is challenging that assumption and suggesting that ghrelin, like many other hormones, has its own circadian rhythm and is released before a person’s normal meal time.

We do know that chronic calorie restriction diets and sleep deprivation also lead to more ghrelin and an increased appetite. You may think that not eating for a while - like through intermittent fasting - would stimulate your appetite as well, but research is showing otherwise.

One study measured fasting ghrelin levels in six healthy subjects every 20 minutes for 24 hours. There are a couple of important things to note here. 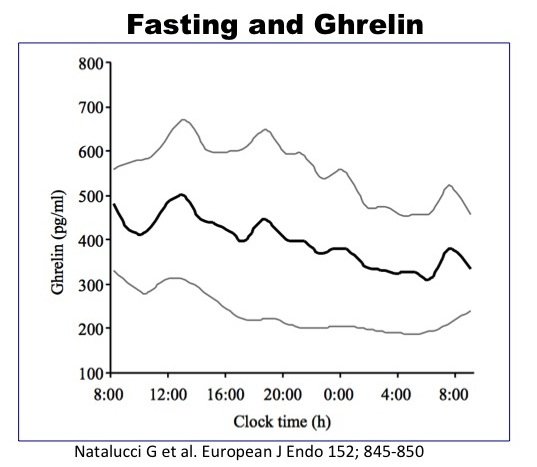 First, ghrelin levels are usually lowest around 9 in the morning. Recall that this is also generally the longest period of the day where you haven’t eaten. This reinforces the fact that hunger is not directly related to how long you go without food.

At 9 AM, you have not eaten for about 14 hours, yet you are the least hungry. Eating does not necessarily make you less hungry. When I'm intermittently fasting, I’ll notice very little hunger for the 16 to 18 hours of fasting, but once I start eating for the day I’m hungrier the rest of the day.

Often I’ll tell women to skip breakfast to extend their fast and they say, “Wait a minute, I thought breakfast was the most important meal of the day to boost my metabolism!?”

I won’t get into specifics here, but I tell them that’s just good marketing by food companies.

Very often they’re relieved and tell me they were never hungry for breakfast in the first place, but felt like they should eat it because that’s what everyone else does and that’s what other weight loss programs taught them to do.

Now you see from the research, hunger is lowest in the morning after the initial peak before our normal breakfast time, which is possibly why breakfast is the easiest meal of the day to skip if you want to start intermittent fasting.

If you can just ignore the hunger first thing in the morning, chances are you’ll easily make it closer to lunch before you’ll notice hunger again.

Next, notice how there are three distinct peaks that correspond to our normal meal times. This indicates that there is a learned pattern to ghrelin’s release. If you’re used to eating at 8 AM, noon, and 6 PM, you’ll get hungry about those times. This can help you mentally prepare for hunger around your normal meal times when you’re fasting to mentally prepare and expect that hunger to pass relatively quickly.

Another study showed that over 3 days of fasting, ghrelin gradually decreased. This means that patients were far less hungry despite not having eaten for the past three days. This study also showed a clear circadian rhythm to ghrelin and highlights the fact that hunger “comes in waves” 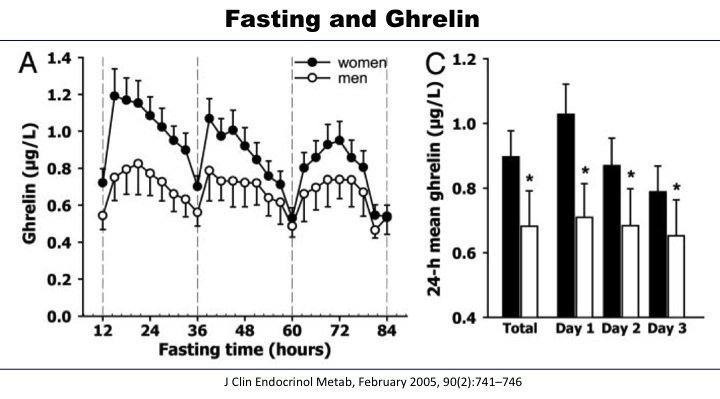 Notice in this graph, men are the white bar and women are the black bar. Research has shown that women have a higher amount of ghrelin, which may be why we tend to feel stronger food cravings compared to men...rarely do I hear my husband say, “I just need some chocolate.” Both men and women had a significant decline in ghrelin, but the women showed a greater overall decline than men after this three day fast.

I often hear from women that they thought fasting would be so hard, but in fact it’s easier than they anticipated, especially if they follow my recommendations of priming with protein the day before a fast, staying distracted, and being well hydrated.

Here are a few other notes about the hormonal changes of fasting. 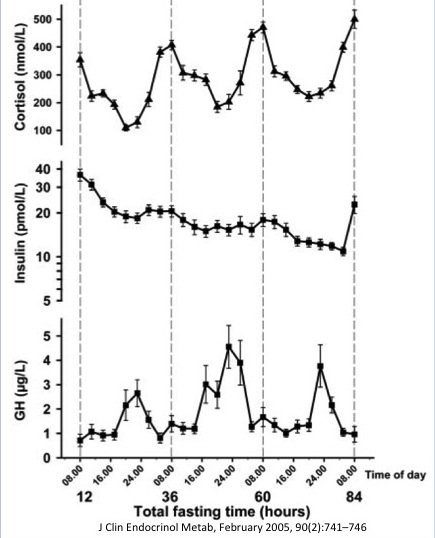 Notice that cortisol does go up during fasting. That’s because fasting is a hormonal stressor on your body. I never do my 24-hour fast unless I’m well rested. It’s going to be harder due to increased ghrelin and cortisol levels. If you’re not sleeping well, don’t beat yourself up if fasting seems hard for you. There are plenty of strategies to make it easier, but first and foremost focus on improving your sleep.

Insulin also goes down, which is great because it allows your body to tap into stored energy for fuel and  helps reduce insulin resistance. One study showed that people who fast for 24 hours once a month are about half as likely to be insulin resistant and develop diabetes as those who don’t. Growth hormone goes up during fasting to help preserve your muscle when you’re fasted.

Intermittent fasting is one of the best weight loss strategies, and when you pair it with proper nutrition, you’re well on your way to keeping the weight off.

The secretion of other hormones that signal a feeling of fullness, or satiety such as cholecystokinin (CCK) and peptide YY which are involved in short‐term regulation of food intake are also impacted by the type of food you eat.

CCK and peptide YY are triggered by protein and dietary fat, but not starches and sugars. I like to say this is why we always have room for dessert even after a huge meal - because those simple carbs don’t trigger our satiety hormones.

To hammer this point home, it’s important to include protein and healthy fat in your meal. If you just have a meal or snack that’s primarily carbohydrates, like cereal, oatmeal, pancakes and syrup, even just fruit, you’re not going to be triggering your satiety hormones, and further, you’re going to cause a blood sugar spike, which inevitably leads to a drop, and that dip in blood sugar will make you want to eat again.

Normally, after we eat, ghrelin levels go down, so we aren’t hungry anymore. But research has shown that in people who are obese with insulin resistance, their ghrelin doesn’t go down as much as someone with a healthy BMI and better insulin sensitivity. Certainly not all people with obesity eat an excess of food, that’s not the only cause of weight gain, but many of them do report they struggle with appetite control, and this suppressed reduction in ghrelin following a meal may be one of the reasons why.

Interestingly, this study found that this phenomenon of a suppressed reduction in ghrelin only occurred after a glucose load. In contrast, the presence of obesity did not alter ghrelin response to the lipid or protein loads. Remember there that ghrelin (or hunger) was significantly reduced after eating fat, and was not affected after eating protein.

I cannot emphasize enough the fact that all calories aren’t created equally. In previous episodes I’ve talked about how different types of calories affect insulin differently, and this episode proves that they also affect your satiety differently.

And it’s common sense really. Think about how full and satiated you feel after eating 500 calories of chicken versus 500 calories of cake. It’s so important to eat real, whole foods and reduce your consumption of processed sugars and starches to reduce your insulin resistance.

Sleep deprivation will result in higher levels of ghrelin. As you can see from this study, short sleep duration not only led to increased ghrelin, or hunger hormone, but also contributed to reduce leptin, or satiety hormone. 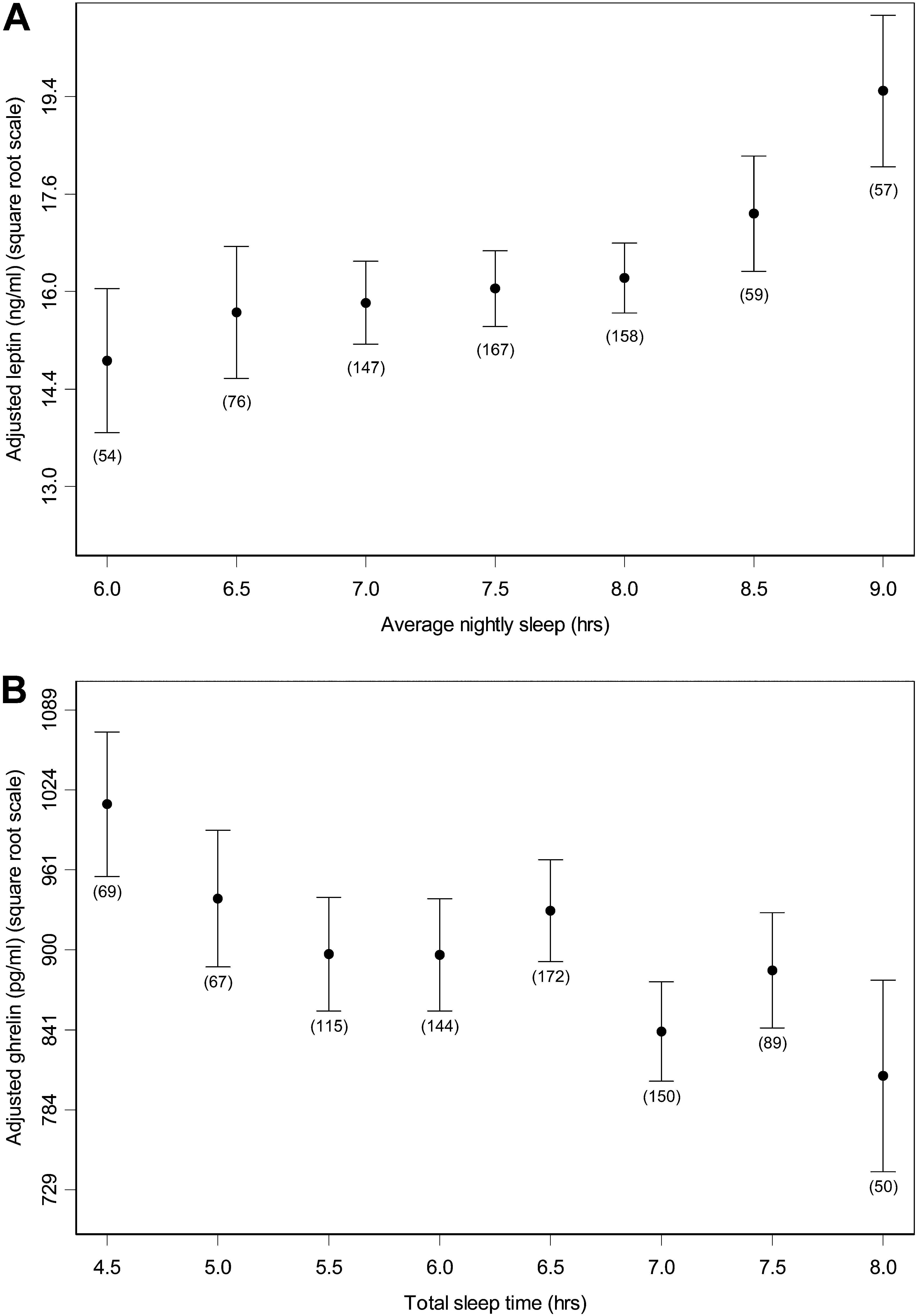 When it comes to weight gain, sleep deprivation is at least a triple whammy because sleep recharges your willpower battery. So not only will you have higher levels of ghrelin making you more hungry, reduced levels of leptin making you feel less full, you’ll also have reduced self-control and willpower, making it more likely you’ll overeat.

I want to briefly explain how ghrelin causes a rise in blood sugar and fat storage, ultimately contributing to insulin resistance.

There are three types of adipose, or fat, tissue: white, beige, and brown.

White adipose tissue is the storage type of fat. Beige fat falls in the middle and acts more like brown fat to burn energy.

Ghrelin will reduce the metabolic activity of brown fat, essentially slowing your metabolism. Ghrelin has a two-pronged effect on white fat. Ghrelin will cause your body to make more white fat, a process known as adipogenesis, and reduce it’s breakdown, or lipolysis. More fat than your body needs leads to inflammation and insulin resistance .

Ghrelin’s Effect on the Pancreas

Ghrelin’s effect on the pancreas serves to raise blood sugars. It reduces insulin secretion. I know this sounds counterproductive because increased insulin leads to weight gain, but remember this is the short-term effect of raising blood sugars.

Insulin’s job is to allow blood glucose to move from the bloodstream into the cell, but ghrelin wants to increase blood sugars, at least in the short term, so it inhibits insulin.

At the same time, ghrelin will cause an increase in glucagon from the pancreas. Glucagon is the opposite of insulin. While insulin wants to lower blood glucose, glucagon wants to raise it. Glucagon signals the liver to create more glucose. What happens is that your blood sugars go up, and then your insulin will be released to bring them back down.

Subscribing and leaving a rating and review are important factors in helping the Reshape Your Health Podcast and the YouTube Channel reach more people. If you haven't already subscribed, please do that today.

We would also be grateful if you left a rating and review, too. In your listening app, scroll to the “Ratings and Reviews” section, then click “Write a Review” and let us know what you enjoy about our show. We appreciate you taking the time to show your support. Thank you!

Resources From This Episode 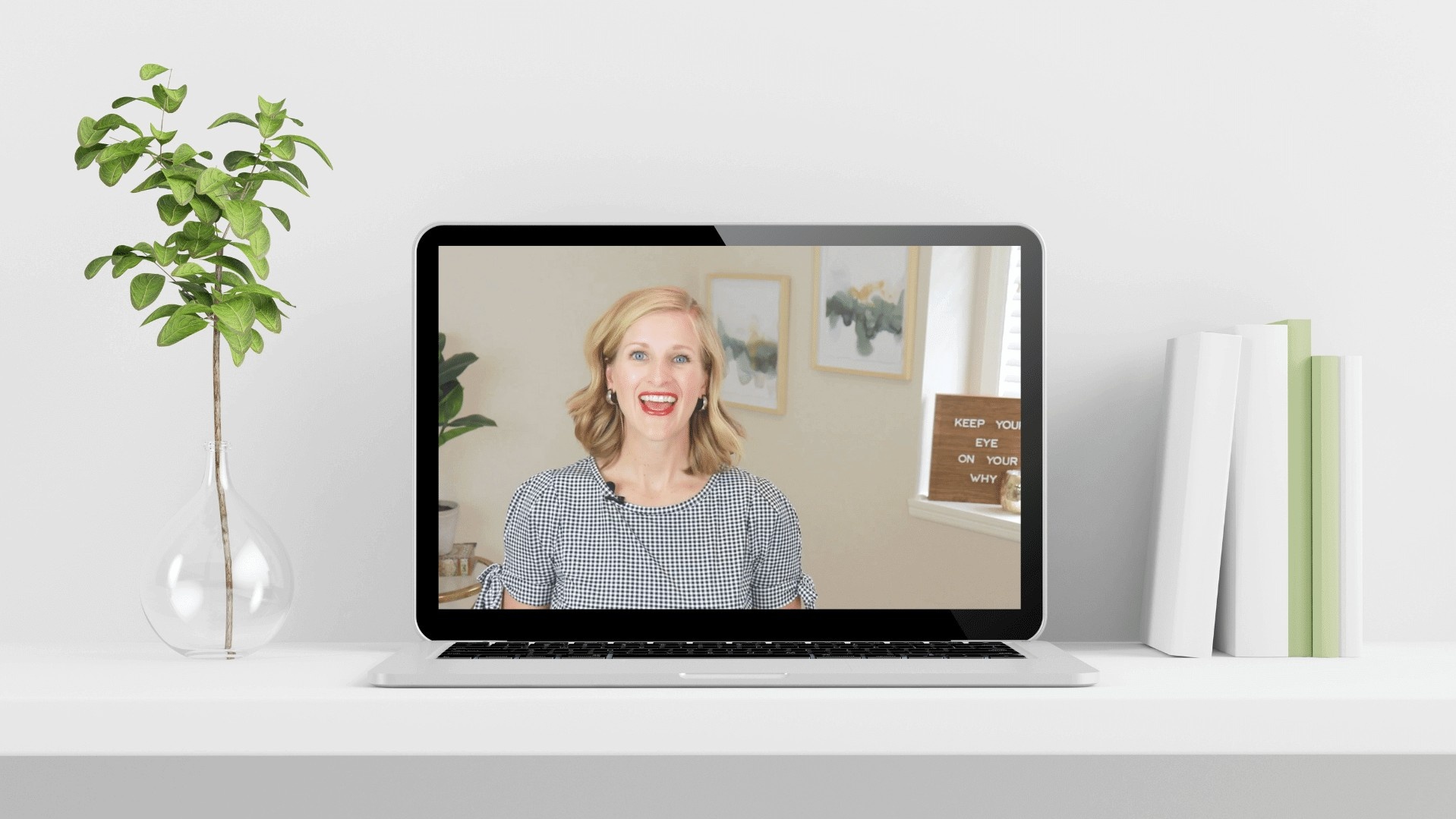 Watch this in-depth masterclass about how to lower insulin resistance and inflammation.